When Zachary Killam was a renter years ago, he found it strange that all his rent payments counted for nothing on his credit score.

“When I moved into my first place, I had a $300 credit card limit. I paid my rent on time, but it always struck me: Why isn’t my rent ― which is of course my largest expense each month ― not on my credit record? I have a credit record for my phone bill but not my rent.”

Today, Killam is doing something about it. As CEO of the for-profit Landlord Credit Bureau (LCB), he inked a deal with credit rating agency Equifax that will allow tenants to have their rent payments count towards their credit score.

Anyone who signs up for a tenant record with the LCB will have their rent payments reflected in their Equifax credit score. However, it’s worth noting that this only applies to Equifax’s score, and not to scores at Transunion, Canada’s other consumer credit agency.

All the same, this could be especially useful today, amid a pandemic that has hit lower-income and younger earners ― i.e., renters ― particularly hard.

There are many renters with poor credit scores who actually have a good record of paying their rent on time, and “they have a harder time getting housing because landlords check credit scores,” Killam told HuffPost Canada in an interview.

“We should be giving credit to consumers for paying their rent on time.”

Among other things, a better credit score can help reduce your cost of living, as lenders offer better interest rates to more creditworthy consumers.

Killam says it could especially help immigrants, who often struggle to build credit in Canada because their records from back home aren’t recognized here.

And trouble paying the rent during the current economic crisis doesn’t have to damage your credit rating, Killam notes.

“For anyone who’s been financially impacted by COVID, as long as they communicate with the landlord and set up a payment plan, they can still keep improving their credit rating with Equifax. There is no negative impact for someone in that situation.”

We should be giving credit to consumers for paying their rent on time.
-Zachary Killam, CEO, Landlord Credit Bureau

But late payments, and damage to the property, can negatively affect a tenant’s credit rating.

The LCB launched in 2012 as a way for landlords to reduce risk ― and for responsible tenants to get a leg up in the market ― by sharing reports on tenants. But until now, its data was never reflected in tenants’ credit scores.

“Ninety-plus per cent of the records we get are positive in nature, so overwhelmingly landlords use this to reward tenants,” Killam said.

The service is now available in all provinces except Quebec, though Killam says it will be expanding there in the near future.

Correction: An earlier version of this article stated that Canada has principal consumer credit ratings agencies. It has two, Equifax and Transunion.

The information provided in this post is not intended to be construed as legal advice, nor should it be considered a substitute for obtaining individual legal counsel or consulting your local, state, federal or provincial tenancy laws.

GET STARTED FOR FREE 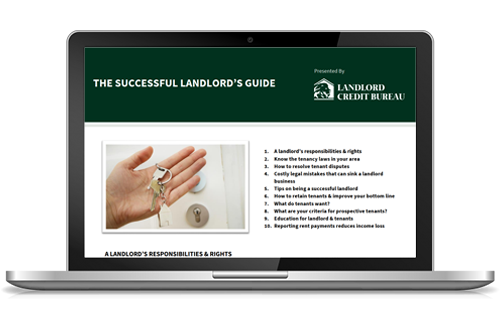 Landlords and Property Managers get exclusive tips,
strategies and answers to the most popular questions.

You can find out more about which cookies we are using or switch them off in settings.

This website uses cookies so that we can provide you with the best user experience possible. Cookie information is stored in your browser and performs functions such as recognising you when you return to our website and helping our team to understand which sections of the website you find most interesting and useful.

Strictly Necessary Cookie should be enabled at all times so that we can save your preferences for cookie settings.

If you disable this cookie, we will not be able to save your preferences. This means that every time you visit this website you will need to enable or disable cookies again.